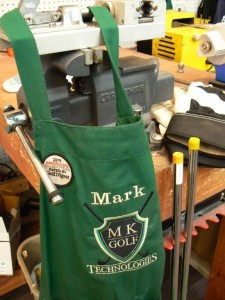 Why would you want to be custom fit for golf clubs by MK Golf?

“After a 1/2 hour at a driving range to correct the swing flaws you noticed, and two days of walking (and practicing) 9 holes, I played in the Thursday money game at Alsation. 78 and 3 birdies later, I was the favorite “E” player there. The Ping i500 Irons are fantastic. They tracked like they were on a string. They are at least 1/2 club, but closer to a full club, longer. Surprisingly forgiving. Yesterday, I hit a 5 iron clearly on the toe. It still reached the elevated green and held. They have a noticeable “click” especially when hit flush. I don’t think they have the bite of my old Mizuno’s. But the ball flight is higher letting the ball drop on the green.

As good as the i500’s are, the Mizuno wedges are even better. These things get the ball up easily from varying lies. The ball checks and stops. The 58 degree is much more user friendly than my old Mizuno 60 degree.

Thanks for the thorough firing and the impromptu lesson.”

“Mark and Kirk have been satisfying the needs of golfers for years, providing their skill, knowledge, and personalized service that helps players of all levels build confidence in their golf equipment and their games.  They both have a willingness to share their knowledge of club fitting and swing mechanics with their customers.  They offer their customers the latest technology and the finest equipment available. They have a passion for the game and helping their customers improve.”

“I went to see Mark at MK Golf Tech just to make sure my new irons were fitted properly, I’ve read multiple articles in the golf magazines about proper fitting and finally took the advice. I’ve been playing stock “stiff” shafts for several years as my swing speed seemed to dictate that flex according to the OEM manufacturers. Mark put me in the hitting bay and I proceeded to hit 10-15 balls with my own club and we recorded all the numbers, most importantly the dispersion rate. He then had me hit 10-15 balls with 3 different other shafts and we recorded the same information. Numbers don’t lie. Mark recommended I reshaft with another shaft, X flex and 120 grams, which is stiffer and heavier than I EVER would have thought I should play in my irons. I was skeptical, I’m nearly 48 years old and not getting younger or stronger, but again, the numbers told the story. My dispersion rate went from 28 square yards to 7 square yards. It’s been about a month now, I’ve played 10 rounds with the new shafts. I am hitting the ball straighter, higher, and LONGER! I’m hitting 1 club less on full shots with stiffer and heavier shafts. Mark was right, I wish I’d done this years ago, I won’t put another shaft in any club without seeing Mark first. That pretty much says it all I think. Do yourself a favor, go see Mark, a full fitting will cost you less than the cost of a new fairway wood or driver and it’s a better investment.”

“Everything was top notch for me but the customer care I got from Mark and Kirk were world class. They both were focused on fitting me with the right club for me NOT selling me the most expensive clubs. I felt like I had made two new lifelong friends.”